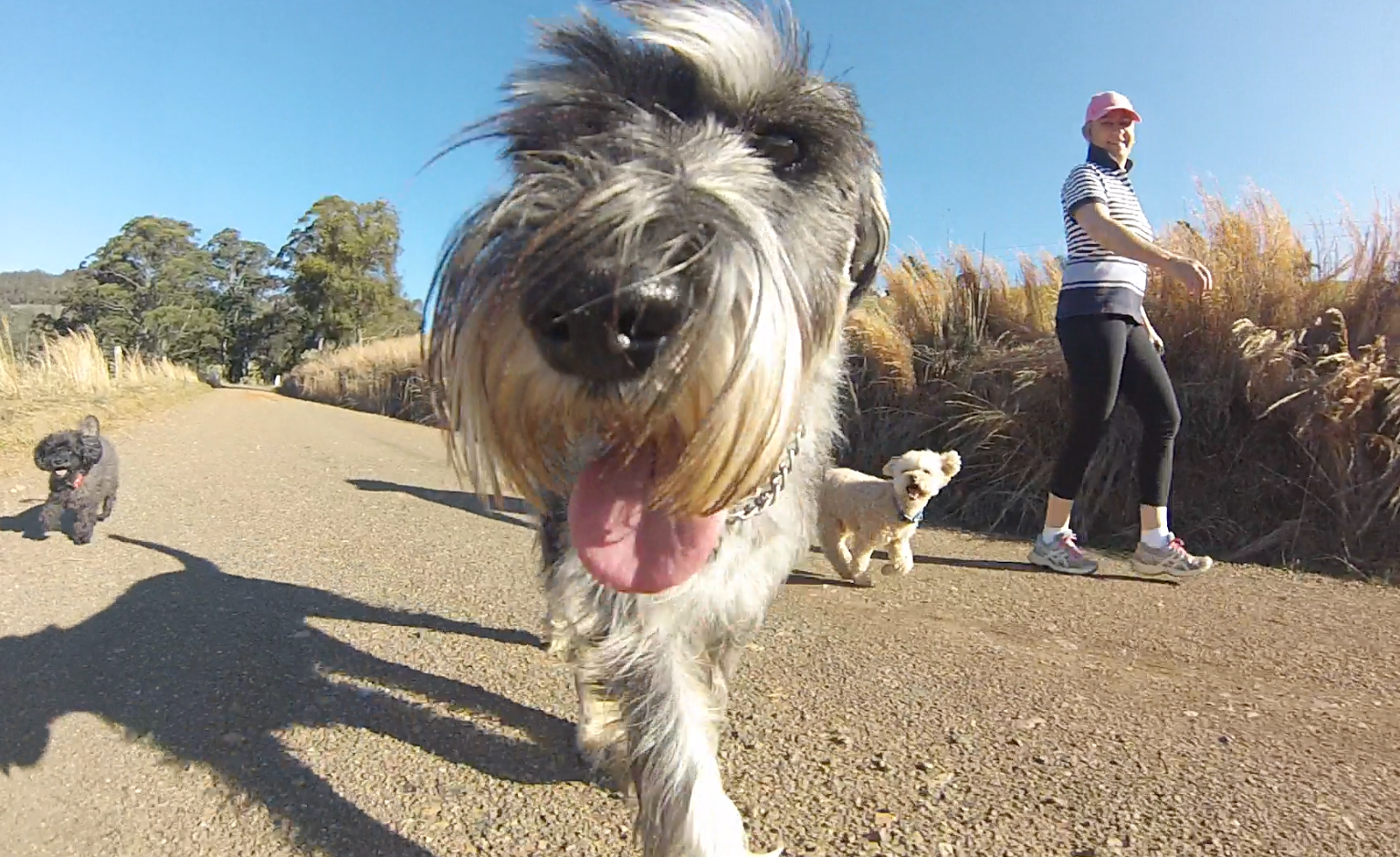 Chuddly was a very calm and quiet dog. He didn’t bark unnecessarily, and his deep, dark, pool-like eyes missed nothing. He loved his humans more than the food in his bowl and he was alert to their every mood and movement. They gave him love and cared for him in every way possible.

These humans were his second family. The first people he lived with when he left his mother and siblings didn’t really take much notice of him after he’d grown out of being a cute little puppy. They ignored his needs most of the time and he was left alone in the small yard that became his prison. His long, silky, mostly white hair became matted and dirty and his food and water bowls remained empty most of the time. One day, a large truck came and there was a lot of activity, with the furniture and everything in the house taken away. Chuddly thought he’d been left behind; he was wrong. The woman of the family came back and put him into the family car. He hadn’t been in the vehicle since he was a puppy nearly two years ago. “At last,” he thought, “they’ve remembered me!”

He was put into the boot and the lid was closed, leaving him in almost total darkness. As the car moved along he was buffeted and thrown around amongst the junk and dust which added to the scurf and grime of his coat and his short legs had trouble keeping him upright.

When the motion finally stopped he was so bruised and sick when he was lifted out and placed on the ground he threw up all over the woman’s red shoes.

“You stupid dog! Look what you’ve done!” as she aimed a kick at his belly. He was too quick however, and dodged her foot easily, which caused her to slip and fall into the mud beside the car. Realizing he’d better move fast, Chuddly ran, dragging the lead from her hand. He didn’t know where he was, but there seemed to be fences everywhere and no escape! His freedom didn’t last long, as someone grabbed his lead and halted his mad, panicky run.

The voice he heard was gentle and kind and he turned to see a woman with eyes like the sky and hair like the clouds on a spring day. Chuddly knew he was safe with her. She crooned softly to him and he felt as though she was leading him to heaven.

“That’s him!” came the harpy’s shriek. “He’s nothing but trouble, and he’s vicious! Look what he’s done to me!”

“That’s OK. Leave him with us and we’ll deal with him now,” said the gentle voice.

“My shoes and dress are ruined thanks to him. After all I’ve done for him too; he should be put down… ” The witch’s ramblings faded away into oblivion.

The angel – that’s how Chuddly thought of this new woman – squatted down in front of him and looked closely into his eyes.

“You don’t look like a demon dog to me. But you are filthy and smelly! We can fix that in no time.” She stood up and led Chuddly into a building smelling very strongly of dogs and cats. He hated cats; he did trust this woman though.

Chuddly was scrubbed with shampoo, then brushed and dried so at last his true appearance emerged. He was given a haircut which he desperately needed, so his eyes were able to see beyond the fringe, and finally placed into a secure kennel with fresh food and water.

“There you go little one. Get some food and rest and we’ll see about finding you a new home,” then the angel was gone. Chuddly wolfed down his food and curled up into a tight ball in the clean soft bedding, more content than he had felt for a long, long time.

He awoke to the sounds and smells of dogs all around. He could see other dogs in kennels like his opposite him. They were looking towards the main gate at the end of the compound and barking excitedly…”Breakfast, breakfast, breakfast!” they chorused. The noise was incredible.

A human in overalls appeared with a trolley smelling of food. He went to each kennel along the row and placed food into the bowls and patted every dog he came to. They all seemed to know him and the wagging tails could have turned the sails of a windmill. When at last he reached Chuddly he reached in and patted him with a, “G’day Boy, how’s it goin? You look like you could do with a bit of meat on those ribs of yours. Tuck in.” Chuddly did.

When he’d finished he heard a dog from opposite – a large, black Labrador cross, call out to him…

“Oy, what are you in for? Did you bite someone or something?”

“No, I chundered on my human’s foot though.”

The kennels erupted into dog laughter, which to humans sounds very much like barking.

“You little beauty,” said the Labrador.

“What is this place?” asked Chuddly.

A brindle coloured Staffy answered, “It’s where dogs and cats are brought to when humans don’t want them any more. The lucky ones are given new homes. The others just disappear.”

“You mean even cats are given new homes?”

“Yeah, it’s hard to believe isn’t it?” answered the Staffy.

Chuddly’s kennel caught the morning sun, so he lay down and dozed, satisfied the angel woman would somehow find him a new home.

Towards mid morning she appeared in front of him, crooning kind sounds. She opened the gate and clipped a lead onto his collar before leading him out to a huge grassy area where she let him go. There was a wire fence around the perimeter but plenty of room for Chuddly to run around and do what dogs do when they are let loose after being confined for a while! He could smell a multitude of doggy smells and was oblivious to the sound of being called. When he did look up he saw the angel laughing at him and he ran to her as fast as his little legs could take him.

“I don’t think those people who left you here knew your real name.” She stared into his eyes and asked him politely to tell her what it was. As he looked adoringly back at her, she said…”It’s Chuddly isn’t it?” At this he rolled over onto his back and wiggled and squirmed with delight. She knew!

It’s a strange thing, dogs and cats are able to understand most of what humans say. Maybe because they have lived with us for such a long time, but Chuddly understood the angel much better than his first family, and she certainly understood him.

The same day when it was nearly dark, the angel came back to Chuddly’s kennel and took him away again. This time to her car, where she sat him on the back seat on a special soft rug and clipped him into a harness to keep him safe. She drove for quite a long time, but the car was smooth and comfortable and didn’t make him sick. When she let him out she didn’t put a lead on him but allowed him to look around as best he could in the dark. It smelled fresh and exciting and he would have loved to explore a lot more but she called to him… “Chuddly!” He ran eagerly to her and was let into the house.

Inside, he was greeted by a man with very dark eyes which seemed to look right into his soul. “So this is Chuddly? I’m pleased to meet you at last. I’ve heard so much about you.”

He was shown around the house from room to room by these two humans and finally taken into the laundry where there was a bowl of food and another of fresh water. He was so hungry he gobbled down the food; a snugly soft bed in the corner beside the hot water heater is where he headed next.

“Good boy Chuddly. See you in the morning,” he was left to dream away the night.

Chuddly was awake with the birds the following morning. At first he wasn’t sure where he was, and then it all came back to him. At the sound of footsteps he stood and stretched out his whole body watching and waiting for the door to open. At the sight of the angel he whined and writhed in absolute ecstasy, licking her hands as she tried to pat him and jumping as high as his chunky legs were able.

“Ok, little one, let’s go outside and see the birds!”

He bounded out through the open door to be greeted by the fresh air and the cold, crunchy, frost covered ground. There were so many smells to explore his nose became overloaded with delight. His hairy tail was wagging so fast he nearly took off! The sound of beating wings close above his head alerted him to the fact he wasn’t the only creature out and about.

“Look where you’re going,” came a cry from a large magpie.

At the same time a group of Rosellas who’d been quietly feeding on grass seeds scattered out of Chuddly’s zig-zag way.

“What the … where did you come from?” he heard.

“I’m sorry!” said Chuddly. “I was so excited I forgot to look where I was running. It’s a long time since I’ve been able to smell the grass and there are such a lot of strange and wonderful scents around here.”

“Well, alright then,” said the magpie. “I’m Carol, you’re lucky it wasn’t Grubber you disturbed or you’d have a chunk out of your floppy ear by now!”

The rosellas had returned to the ground and now surrounded Chuddly, although they kept out of reach for the moment.

“My name’s Chuddly, and the angel woman brought me here. I think I’ll be living in this place from now on.”

“No, not at all. I didn’t see you. I’ll be more careful in future. Is it alright if I chase cats? I can’t help chasing cats!”

“Hunt as many as you like! The more the better!” all the gathered birds agreed with this.

“I’d better go now. I don’t want to be disobedient on my first day here! I hope we’ll chat again.” He turned towards the sound of his rescuer and raced into her arms nearly bowling her over on the slippery ground.

Chuddly settled into his new home very well. No longer was he confined to a tiny yard. He had freedom of the huge garden during the day and a warm soft bed in the laundry each night. He was able to spend most of his days with the humans, who he learned were actually called Angela and Fergus. They were at home most days and loved to be outside in the garden, or going for long walks in the forest or across the neighbouring farmland.

Chuddly found he was a great gardener. When Fergus or Angela were out weeding or planting, he would help them by grabbing the weeds pulled out and making sure they were dead, shaking them vigorously with his mouth before strewing them around the garden. Or else, submerging himself in the holes they hollowed for the new plants and sending extra earth flying as he dug furiously with his stubby front legs. He would emerge with his face caked with dirt, looking like a refugee from an earthquake. He found the delights of manure, unable to understand the angry shouts from his owners when he would drop his shoulder into a fresh cow dung and roll with delight. He also learned to lag behind them on a walk so they wouldn’t see him binging on a newly deposited cowpat. Humans missed out on so many pleasures!