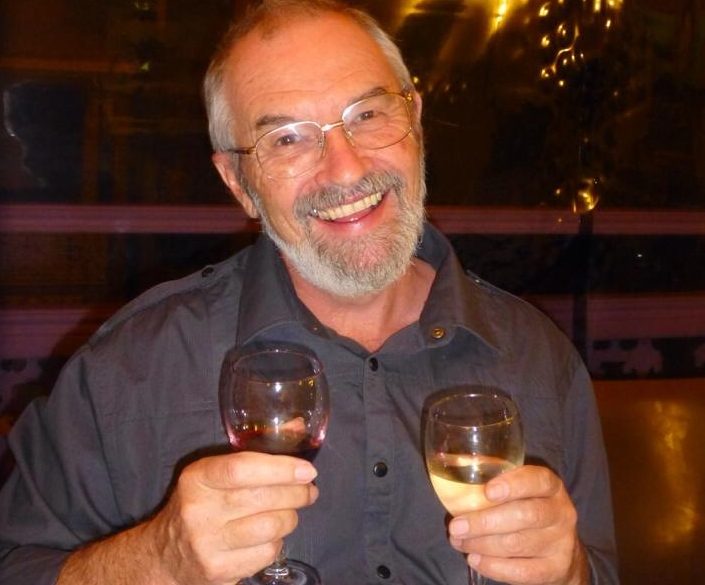 They’re like wrinkles aren’t they? Happening whether you want them or not. They don’t bother me unduly; as I said to my brother when he was complaining about getting older, “The alternative is death.” That shut him up.

We baby boomers can be heard all across the land complaining about the grey hair, wrinkles, aches, pains, and joints that don’t work so well any more – I say, maybe it’s time to give up the joints and have a drink or two instead.

You know you’re aging when gardening becomes a major part of your life. A day of open gardens and plant fairs is considered a great time.

Our ‘little room’ abounds in magazines akin to most wee rooms. This is where true pastimes dwell. A lot can be found out about people from these collections. As I was saying, we have reading matter … how many of us remember to take our glasses with us when on a mission? It’s often a rush to get the best seat only to find that our specs are in the kitchen or beside the computer and so we must squint at the pages and hold them out as far as the arms will stretch whilst dangling precariously on the edge like a young bird attempting it’s first flight from the nest … but I digress.

The publications in our lot used to be motor bike or horse oriented. Our boys had some mags as well but they didn’t seem inclined to add them to the public pile. When concerned relatives came to visit and left gardening and women’s glossies around, they were duly perused with a glass of dry white and then donated to the doctor’s surgery where they belonged. Articles on power to weight ratios, v-twins and carburettors, dressage, endurance and saddlery were much more interesting. Who cared how many different types of gum trees there were or what type of spray to use for mealy bugs? I planted green things and they turned into brown things. My husband, E-spouse, used to watch me come home from a trip to the garden nursery and say … “Why don’t you save yourself the trouble and just throw the plants straight into the compost now!” He didn’t understand the difficulty of trying to have a garden in a climate that was dry, at times hot, and most of the time bloody cold. Frosts were possible at any time of the year but in winter we had weeks of minus eight to ten mornings before the season warmed up to balmy dawns of minus four or five. A challenging scenario to the best of gardeners.

Well, since we have matured, gardening is more than an idle interest and the bike and equine magazines have been replaced with literature of a more botanical nature. This irks the hell out of the boys when they visit because there is nothing interesting to read on the job. It has however, pleased the other relatives who believe at last there is a decent library in the loo.

So to gardening. We now live in a climate which allows most plants to grow. Even the ones I place in situ. Green is the new brown. As most gardeners admit, many plants turn up their roots and compost themselves despite the best nurturing advice from Peter Cundel. This is where I’ve had my revenge. E-spouse is a keen gardener himself these days. Some of his plants die too. He now realises the difficulties of gardening, even in a decent clime. Unlike me, he cries over every skeletal form that appears on his horizon. How dare it die on his watch? I say, get over it and put in another plant.. Preferably, a variety already growing successfully in the area. Sometimes, I plant things which, once established don’t fit in the way I’d hoped. To me it’s no big deal to move or remove said vegetation. To E-spouse however, that’s a crime. It should never have been planted there in the first place. Why don’t I plan better? Can’t I visualise the desired outcome? At these times it crosses my mind that if I could do that, I’d probably never have gotten married. But then I wouldn’t have a beautiful pond in my garden. I had mentioned to E-spouse on a few occasions how lovely it would be to have a water hole where the many reflections of the trees would be mirrored on the surface and where the frogs could gather and do what frogs do. You see, I didn’t want a little pond the size of a child’s wading pool. I wanted a grand pond. A sprawling pond. E-spouse must have been bored one day because he began to dig … and dig … and dig. When he bought one of those miners lights – the ones that they wear on their heads – and appeared for meals with a face covered in red earth like some sort of ginger coalminer, I began to worry; maybe he’d lost the plot. My fears were short lived however, as the digging finally ceased and it appeared we were the proud owners of a large hole. Presently, we had torrential rain as only Dorrigo can, and the hole filled to capacity and more. The water gushed over the rim and down the hill. We feared all his efforts were for zilch and we would be left with a miniscule muddy concavity. Oh me of little faith! The hole stood its ground, the water drained away, and the rim remained intact.

The next step was to measure the area in order to get a waterproof liner – a groundsheet not a ship. Now, E-spouse has a method where you measure three times and cut twice, which is why I was a bit nervous about purchasing such an expensive item. He also has a mate who put a pond in his suburban backyard. Now, this fellow is a real stickler for having everything just right – have you heard that awful term ‘anal’? Well I think it applies to him. So he dug this hole and measured, and measured, until he was certain of the dimensions for his pond liner. He had the special facing made up in the factory so he didn’t have to make any joins himself and risk it leaking – which is a major problem with water features as E-spouse knows only too well …

E-Spouse once put a water feature in our garden. A pump, recycled water from a small reservoir at the bottom, up and over a wondrous construction of rocks, creating a small waterfall amongst the ferns and plants. It was a beautiful addition and the sound of tinkling water put my bladder on constant alert. The problem was, no matter how much cement and sealant E-spouse piled on, it leaked – the water feature not my bladder. Whenever we went to a particular hardware shop, which will remain anonymous, they used to call out … “Bring in the truckload of silicon – he’s back!” This went on for months – I have to give it to him he doesn’t give up on a challenge easily. Finally, it became too much. He took the mattock to the lot and turned it into a waterless rock feature and we could both relax. Back to his mate …

The liner finally arrived and this friend excitedly unwrapped and laid it out. This was going to be the best pond in the street. He decided to measure it before placing it in the hole – to be absolutely certain. Imagine how he felt when he discovered it was too big! Not to be deterred, he decided to cut it. After all, it was better to arrive too big than too small, wasn’t it? Measuring again, he marked it and cut the desired size. “Now it’ll be a perfect fit,” he thought confidently. Into the hole it went, moulding itself to the contours and settling into its shape. That’s when the problem became apparent. You see, in thinking it was too big, he hadn’t allowed for the depth of the hole; and now the liner was definitely not able to reach up the sides to the top. The off-cut liner had to be re-joined. He now has a beautiful pond with plants and fish and a dinky little fountain, but for some reason that bloody pool leaks.

E-spouse learned by his mate’s misfortune and ordered plenty of facing and a pallet load of glue. On the day we unveiled the goods to seal the pond’s base, all went smoothly and without mishap. Not a join in sight. We filled it, and lo, the next day it was still full to capacity without a hint of leakage. There is a plethora of special tape and glue sitting in our shed. I said we should offer it to E-spouse’s mate but somehow he didn’t think that was a good idea.