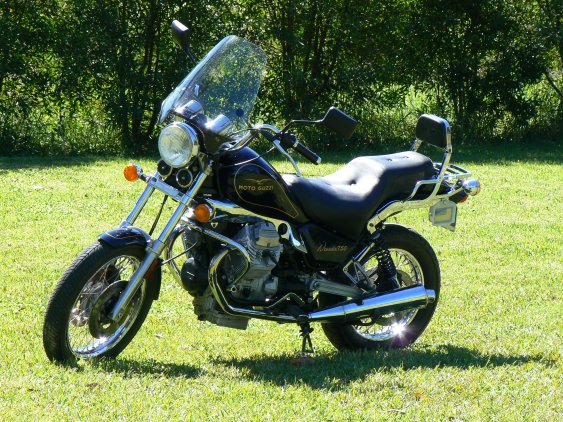 Living here in the mountains, it’s always a refreshing change to visit the coast. To feel the heat and humidity, the sandflies and mosquitos. We do get spoiled here I admit. To us 30 degrees is almost unbearably hot! So, off we set, ostensibly to visit the rellies – or “outlaws” as Windbreaker would put it – but really for the shear enjoyment of a great bike ride. Couple-a-days, beautiful!

The Thunderbolt’s Way, between Walcha and Gloucester is a truly scenic run and a very direct route from the mountains of New England to the coast. It varies between rolling grazing land to temperate rain forest, and if you’re lucky you will spot a koala or two. If you’re unlucky, you will run into a wombat -one of those is enough! Kangaroos and wallabies also abound, so you need to keep your wits about you.

Carson’s lookout half way between Nowendoc and Barrington, gives a fantastic bird’s eye view towards the coast and the valleys in between, so it’s definitely worth a pit stop (there is a toilet).

As the altitude lessens the heat increases, it’s hard to believe just what a difference there is in the temperatures. By the time we reached Barrington for a bite to eat, we were almost welded to the bike!

A caffeine fix and a bit of a feed, and we were ready to tackle the next stage of our journey to the coast.

Our first port of call was Forster to visit the “outlaws” on WB’s side, and as we glided into Tuncurry and Forster the temperature dropped at least 5 degrees so that breathing once more became possible without a respirator!

Sister and brother outlaw were staying in Forster for a week of fun filled frivolity and golf, accommodated in a lovely house perched on the hill, an easy walk from the golf club and overlooking the ocean. The wind, however, had been howling for days on end and had put a definite damper on the golf, not to mention the beach excursions, so that even our arrival seemed a welcome diversion to them! We enjoyed a very pleasant hour or so in their company before heading off for Taree and WB’s turn at his outlaws.

Once more the temperature climbed as we neared Taree – luckily the rellies had a fire extinguisher on hand as we peeled ourselves from the Guzzi. What a delight to enter the air conditioned comfort of the house and exchange riding apparel for shorts and t-shirts.

I won’t bore you with the details of a typical family gathering – where instead of being a real “grown up” you revert to the roll you “enjoyed” as a child. However suffice it to say that we had a really enjoyable couple of days – despite the company (sorry Bro)!

On the morning of our departure, the weather decided to threaten rain, in fact, the mountains were definitely shrouded in mist. To the true biker, this would pose no problem.

However, we are talking about moi, the eternal woose. Possessing a waterproof jacket is one thing, but I did not possess any wet weather pants. So we proceeded to visit every bike shop in town to purchase a miniature sized pair. They did not exist. WB found a pair to fit him, so I resigned myself to getting wet and off we set.

The Guzzi decided to present us with a few intermittent coughs and hiccups as we travelled along, so we stopped at a true biker’s haven with Jim Morris at Camden Haven MCs at Kew. After going over the bike with his stethoscope and checking it’s reflexes, Jim declared that the Guzzi’s heart and lungs seemed fine and that maybe a blood test would show muck in the carbie. Being an owner of 70’s vintage Ducati he was well acquainted with the idiosyncrasies of Dell’Ortos.

Off we went once again. It was a far from relaxing ride as the bike still complained from time to time and the weather began to close in more and more.

This was the first time we’d ridden up the Oxley Highway from the coast and we had been looking forward to enjoying what is renowned as a fantastic bike road. However the prospect of doing it in the rain on a temperamental bike wasn’t quite the same.

There was one more bike shop at Wauchope, so on the off chance we called in and checked through every pair of wet weather pants they possessed. There seemed to be hundreds of them, and of course the very last pair were sort of small enough. So, doing my impression of Michelin Woman I waddled off back to the bike. At least I would be dry!

By the time we reached Long Flat at the bottom of the mountains it was obvious that the bike was really trying to tell us something important, so WB pulled up under the picnic shelter in the park – it was raining now – and proceeded to drain the carbie.

Apart from the rain and the problem with the bike, it was very pleasant sitting in the park enjoying fantastic fish and chips from the local shop, as well as some helpful advice from the proprietor (a Bemer owner himself who confessed to once having owned a Guzzi).

It was only as we prepared to leave and WB was replacing the seat, that he discovered that the battery leads were loose. Aha!

The rain held off for the rest of the journey and the Guzzi never missed a beat from then on.

The reputation of the Oxley Highway is not exaggerated, it is a fantastic road on a bike. I have been up and down the same road on numerous occasions over the years in various different cars and have been sick every time! On the bike however, it was a different story. Maybe the fact that I was wearing a full face helmet helped. The last thing I wanted to experience was fish and chips again!