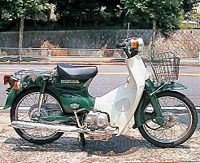 The weather seemed quite fine, there was the possibility of storms later in the day. Since when did the mere thought of precipitation deter the intrepid biker?

Leaving at the crack of dawn (10am) we set off to explore a route only previously travelled (by us) with four wheels. Of course the road workers insisted on stopping us at every opportunity so that they could admire the Guzzi – well at least that’s what Windbreaker reckoned! The first stop (apart from the archaeological digs set up by the main roads department), was for a well earned cup of coffee.
You see one of the most necessary inclusions of any trip, to this pillion at least, are shops, toilets cafes, shops, toilets…and cafes! Not necessarily in that order.
After an enjoyable latté and conversation – you see unless you have microphones in your helmets it’s the only chance to converse normally – we set off once more.

I must just mention here, the certain rituals which must be performed before getting on a bike. It would put most religions to shame (some would say that it is a religion)! There is a very particular order to how you must adorn your person with the necessary paraphernalia. A cautionary note here about earings. Be careful what style you wear as some have been known to rip your ears off when the helmet is removed.
Finally the gloves. These are worn specifically so that you cannot (as a pillion) dig your nails into the driver in front of you! I’m certain that most of the padding in bike apparel was designed not in case of the event of a fall, but to protect the driver from a syndrome known as “Pillion Paralysis”.

So, after a ten minute coffee and half an hour to adorn ourselves once more, we were off. The scenery around the New England Tablelands varies so much from season to season, with Autumn being one of the best times to view the magnificent colours of the many deciduous trees. Now however being Spring, we were able to enjoy the warm air and fresh green of the pastures… along with the ominous black storm clouds! As the wind began to buffet and generally make it’s presence known and a few fat heavy drops of rain began to taunt us with their potential, we decided to turn towards home. I’ve already proclaimed my woosey status and not possessing (yet) any wet weather gear, I was not looking forward to a darned good soaking!

Now I’m not admitting to any excessive speed on our return trip, but suffice it to say that the bike went REALLY well, and some of the cars we passed weren’t going all that fast!
We pulled into the shed at home three minutes before the deluge hit and sat inside, smugly, with that feeling you get when you’ve timed the trip to perfection!