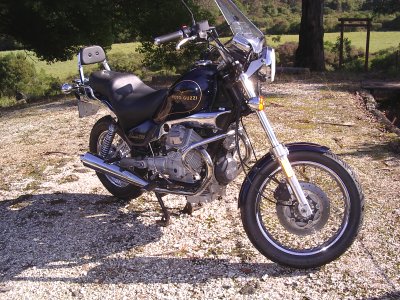 It’s funny the way we change as we get older, and I don’t just mean the ‘character’ lines that begin to appear. Gravity also takes on a whole new meaning as we struggle to oppose it’s unceasing assault on any part of us which is no longer as taught as it used to be!

However, all that aside, our attitudes and ideas, likes and dislikes also do an about turn. Our children grow up (ha! physically at least) and leave the ‘nest’, and decide that we parents don’t know half as much as we used to. So we begin to question what we want to do when we ourselves grow up!

Personally I love the outdoors and always have done, nothing’s changed there. Horses have been my passion for as long as I can remember (and that’s becoming a limited resource!). Now however, because of some apparently meaningless diversion, mechanical horses have replaced the equine variety.

It all began when my beloved…let’s call him ‘Windbreaker’ (I will leave to your imagination the reason behind the name) and I took a holiday up to Noosa. The weather was perfect, we found a fantastic unit right on the water, and gorged ourselves on fresh seafood every day. So, I hear you say, what does that have to do with motor bikes? Bear with me please.

At some ungodly hour one morning, we were awakened by the sound of very loud building type sounds. You know, the ones that bore into your brain so that thinking becomes an optional extra (my family would say that this is the case with me at all times)! The whole unit seemed to be shaking to the rhythm of the works in progress.

‘Right,’ says Windbreaker, ‘I’m going out for a while!’ Thanks very much I think to myself as I sit on the balcony to enjoy the ‘serenity’. Some time later, a different sort of rumbling to that from next door, merges into my consciousness.

Windbreaker appears, donning leathers and helmets and wearing a beaming smile. I try to imagine just how, merely wearing this gear will drown out the noise emanating from our neighbour, and how I will succeed in getting a suntan thus garbed, when Windbreaker informs me that he has hired a motor bike for the day!

As we smugly saunter out of our unit, the neighbour sheepishly appears to apologise for the noise. ‘That’s OK,’ says Windbreaker ‘I’ve hired a Harley for the day, figured it would be quieter than you lot!’

The 1450cc twin roared into life and we thundered off on the Harley FXD trying not to notice the jealous stares of those less fortunate in their cars, and began what was to be the most fun filled day of our holiday!

The hinterland of Noosa has some of the most beautiful country you will find anywhere, and the roads are simply made for bike touring, with gently rolling hills and plenty of corners.

Our first port of call was Kenilworth, where I’m afraid to admit (I’m a woose) I purchased some ear plugs! My teenage sons were so embarrassed about me for that. ‘The best part of a Harley is the noise!’ There were actually two benefits of the earplugs. 1: it lessened the road noise so that I could enjoy the surroundings, and 2: I couldn’t hear a word Wind- breaker said…so that I could fully enjoy my surroundings!

The tour route recommended by David at Aussie Biker Tours – www.aussiebiker.com.au – was just great. It takes in the most beautiful scenery, with plenty of opportunities to stop and appreciate some of the most inspiring art work I’ve seen for a long time.

There certainly are many extremely talented artists displaying their work in the various galleries scattered through the picturesque little villages and towns. One of the drawbacks of touring on a bike is the fact that it does lessen the shopping potential of the trip.  Although Windbreaker would (does) disagree on this point! I suppose I could always use Australia Post!

When we finally returned to our unit, we found a note of apology and a bottle of wine from our friendly neighbour, who assured us that the rest of our stay would be uninterrupted by noise. A very nice touch to end a wonderful day.

Life has a different slant on two wheel

Thus began my initiation into pillion riding. Windbreaker has always had motor bikes, trail and road, but so far had never been able to entice me into doing any serious bike riding

Upon returning home from our holiday, I began to suggest (aka NAG) to Windbreaker that he restore his old Kawasaki Z650B to road condition. A 1977 model, it had been under wraps in the shed for five years. I really wanted to do some more touring on two wheels. He was only too happy to oblige, and so we began some shorter trips from home which decided us that we really needed more of a cruiser style of bike. We are now the proud owners of a Moto Guzzi Nevada 750, which is ideal for us at the moment.

The problem will arise however, when I get my bike licence, because I reckon the Nevada could be just my size! That would leave Windbreaker without wheels, unless of course he were to buy a Californian…