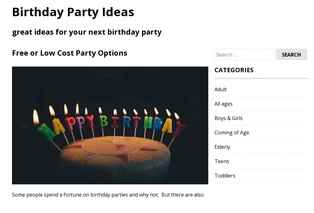 This cake is special.

It’s my third birthday. You can tell because that’s how many candles are on top.

There was a fete today – not because it’s my birthday but it could have been. My mother took my brothers and me. I had to wear my “good” dress which wasn’t fair because I don’t like dresses boys are lucky they wear shorts and shirts my dress is pink – I like pink the best – it has frills on it and ribbons my mummy makes our clothes I love fetes. I’ve never been before. It was so colourful like when the sun shines through my mummy’s crystal glasses but all around. There were lots of people and I felt like I was walking through a forest except it was moving. There was a white elephant stall but someone must have already bought the elephant before we got there because I didn’t see it.

I took my dolly with me. I’ve had her for ages. She comes in the bath with me at night and I wash her so she’s very clean. A lady asked me if she could see my pretty dolly. I don’t know why but when I held my dolly up the lady looked as though she had taken medicine. My dolly’s lost some hair and her eyes are a bit crossed and one arm is missing. I have a drawer at home; there are lots of bits of dolls in it. Maybe her arm is in the drawer.

I had some fairy floss. I love fairy floss. I especially love watching the pink webs spinning round and round until they jump onto the stick. When you lick it it disappears and tingles your tongue and gets on your fingers a bit like glue and that’s yucky.

When we went home in the car my brothers had a box and they were mean because they wouldn’t show me what was in it. My biggest brother Garry sat in the front next to Mummy and he had the box on his lap. It had string around the outside and I could smell something like a strawberry milkshake.

Later we had a party with Mummy and Daddy and my brothers. We sat at a table that was a bit bigger than a toadstool and there were lollies and a cake. It was covered in icing like the sky looks very early in the morning and had Little Red Riding Hood and the Wolf on top. My brothers bought the cake for me at the fete. They said to the lady they would buy it for their sister’s birthday. They didn’t have enough money and that made them sad. The lady sold them the cake for nothing and said, “Maybe it was priced wrongly.”

I had a wonderful birthday but my brother Alan sulked because he wasn’t allowed to blow out the candles! He looked like he had balloons in his cheeks and thunder in his eyes!

The little girl with the cake is still there whenever I choose to remember.