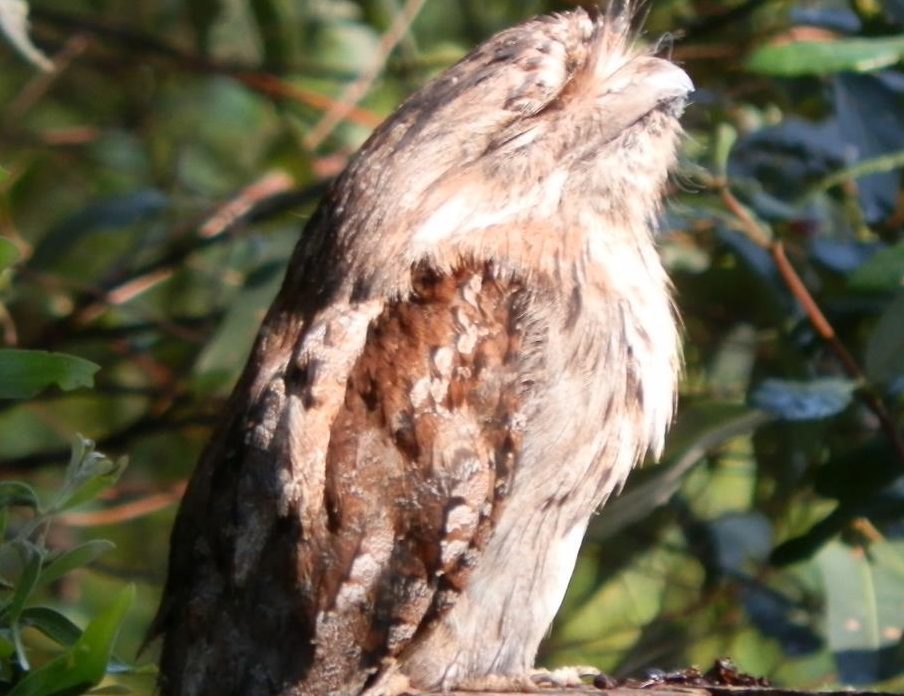 Some would say I lead an idyllic life. No husband, children, pressure or stress. Simply living. It seems I have no need for parties or excesses in my life any more. That is part of who I used to be, in a past I would rather forget. The colours of earth’s pallet have replaced the cacophonous clothing of my youth. I blend.

My home can only be found by those of my own choosing, a very special place to me. It lies cocooned within the growth of centuries of tangled flora and beyond the invasive eye of Google Earth. In this womblike environment I feel nurtured and safe; embraced by Mother Nature as she sighs and murmurs endearments, whenever I care to listen.

In the stillness I am actively aware.

Here, the leaves at the base of the tree have been disturbed. Smell the damp decomposing richness of the scratched earth, and the claw-like gouging as though a dinner fork has been dragged across what was once an ant’s nest. The culprit is not far away. I can hear his miniature bulldozer-like movement traversing the forest floor. Caped in spikes he has no need to be silent. Who would dare to question his right to roam dressed in such armoury? He freely invades the homes of the more industrious insects preying upon their social structure.

It has rained during the night and the morning mist gently touches the trees as it passes. Drip. Drip. Drip. The leaves relinquish the excess moisture and send it down. Toe-like tendrils absorb their fill before allowing the drops to dive into the earth, where they are lost into a universe beyond my senses.

This path has been travelled by many before me. The evidence is everywhere. A feather carelessly abandoned from the wardrobe of a lyrebird lies forlornly in the mud and slush beside my booted foot. Now see the unmistakable direction of a wallaby’s journey in the cadence of its tracks.

The sudden and raucous arrival of a family of black cockatoos shatters the muted whisperings of the breeze and a rain of hoop pine nuts begins descending through the beams of sunlight. The astringent aroma permeates the sinuses and adds yet more mulch to the forest floor.

I sit down on a moss-covered rock and feel grateful for its placement exactly where it is needed. At first, everything seems silent. I listen carefully and hear rustling in the undergrowth. It could be the echidna casing another ant’s nest, but it’s more likely to be a brush turkey scratching its way through its larder of worms and grubs. Yes, there it is slightly to the left of that tree fern.

While I’ve been busy listening and searching for movement I’ve missed something else. In a patch of sunshine on a rock amongst the maidenhair fern lies the coiled form of a carpet python, such confidence in its camouflage; it lies totally inert, unafraid. Even knowing it’s there; I must concentrate to decipher its incredibly beautiful raiment.

I am about to commit a crime. A crime against nature, maybe. A crime in order to save lives. It’s not the first time and probably not the last. This is a totally premeditated murder. A calculated, cold-blooded killing.

The ability to assimilate myself into the surroundings with little disturbance to anyone or anything is vital. My neighbours are so used to me coming and going that they don’t take any notice any more. If one of them disappears suddenly, the commotion is short lived. I have become extremely competent at stalking my victims, gaining their trust, and posing no threat. Almost friendly, always at a distance.

I know where he lives. I know what he eats. I can tell when he has been nearby. He never tries to hide his presence from me. In fact, he’s become somewhat bold about his forays around the neighbourhood, assuming his right of residence is a given thing as it would be if he lived in his native land. His predecessors migrated here many generations ago but he and his family will never be ‘local’; never accepted members of this community. I have vowed to kill him and as many of his family as I can track down.

He has assimilated frighteningly well. Language has never been a barrier to this immigrant. His culinary tastes are quite eclectic and his larder is not often empty. His cunning is legendary. Even barking and snapping dogs do not always deter his presence. He is a thief and a murderer.

I wonder at how easily I have slipped into the role of ‘ethnic cleanser’, and justify my actions as right. Sometimes the edges of right and wrong become blurred.

My next victim is a handsome specimen. Bright, alert, pale brown eyes peer out from his rufus coloured overcoat and he trails a magnificent tawny brush. His hearing is exceptional and he suffers my nearness with a casual glance in my direction. If he understood my true intentions I doubt he would be quite so inattentive to me. He’s beautiful to behold and it’s difficult to believe the amount of damage he and his offspring are able to wreak in this pristine environment.

Tonight will be his last supper. I’d hoped he would move on to another neighbourhood and enjoy the delights of a more urban existence. But unfortunately, his tastes have become far too accustomed to the small marsupials in residence here, who have no defence against his speed and competence.

It’s time. I return to my house and remove the gun from its padlocked cabinet. Such a sleek and well-balanced piece of weaponry. The bullets, small innocuous looking trinkets, I place carefully one by one into the magazine. It usually only takes a single shot from this small calibre .22 rifle. It’s reasonably quiet, and deadly in its effectiveness. I tell myself this to lessen the guilt.

I don’t alter my routine. It’s important for the victim to be comfortable with the regularity of my actions. I step out into the dusk of a full moon. There’s a light dew on the ground, which encases my footsteps. All is so peaceful, surreal.

There’s nothing outwardly different about this evening; but my mind is sharpened, intent upon the task at hand. I can hear the rustling and scurrying of the multitude of residents heading home to warmth and shelter. However, they are only the backdrop to the drama about to be performed.

I sit down upon the familiarity of my rocky platform and wait. It isn’t long before I smell his pungent and unforgettable perfume and hear his careful almost silent approach. Our eyes collide briefly before recognition relaxes their grip. He continues his perusal of the living larder around him and I carefully and intentionally raise the rifle to the level of my vision. I have him directly in the gun sights. My heart is desperately trying to escape through the bars of my chest, and yet I am deathly still. He turns and his eyes once more trap mine in their stare. “I am sorry, forgive me.” I squeeze the trigger and he is struck between those intelligent and suddenly confused orbs. His limp and now lifeless body jumps backwards before resting quietly and harmlessly amongst the detritus of the forest floor.

Slowly, lower the gun and methodically remove the magazine. Release the spent shell and check there are no more cartridges in the chamber. Flick the safety catch on – not necessary as the weapon is empty now, but I take no chances.

What do I feel as I move close enough to view my evening’s accomplishment”? I’m not sure. Certainly not jubilation.

It was necessary, wasn’t it? Someone must act upon the intrusion of feral species. Do I belong here? Am I an alien to a society of creatures who would see me as ‘not belonging’, of threatening their existence?