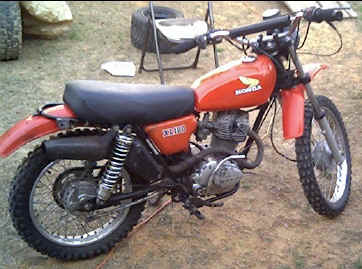 Ah, the beautiful New England! Spring at last. Pack away the jumpers and enjoy the warmth of the blossom scented air!

As we set off for the day there was a certain nip in the air passing us by on the “Guzzi”. Living at an altitude of 1000 metres, one of the worst mistakes you can make is to not take a jumper, always. Even when the sun shines and all appears to be fine and dandy …always take a jumper! Of course I hadn’t bothered today – besides it’s simply mind over matter. Well, I soon realised that I did mind being cold and it did matter!

Being huddled behind the driver (thus the name Windbreak) I was able to escape much of the icy blast, but by the time we reached Guyra (alt. 1320 mts) there was a certain rigidity to my position reminiscent of a cryogenic state. By the time we left Guyra heading towards Inverell, and began to lose altitude, the temperature rose accordingly and the scenery took over where the cold left off. It is a most pleasant run, especially with blue skies and sunshine as constant companions. We especially enjoyed viewing the “grass” tennis courts at Tingha – there would be some very interesting bounces from the ball on this particular turf!

There’s nothing quite like a Chinese meal washed down with lashings of green tea and the anticipation of the homeward journey. The weather was definitely warmer here, and as we weren’t returning home via Guyra – the coldest place on earth – it should be a good ride.

The Guzzi was still standing, so my prior instincts were obviously wrong. Before heading home we decided to check out the bike shops in town. It’s amazing to think that a town the size of Inverell -population 10,000 – can support three bike shops!
Curiosity satisfied, we began the journey home. Apart from a bit of a cross wind and some kangaroos who decided to “come out and play” in the middle of the road – have you ever noticed that when you are showing city people or oversees visitors around the countryside, you never ever see a kangaroo?- we had an enjoyable and uneventful trip back to Uralla where we stopped to re fuel. As Windbreaker filled the tank I stood beside the bowser in quiet meditation – as one does – until there filtered into my consciousness a certain screaming urgency …”Help…the…f…bike!!”

M a t e, don’t you think the Guzzi is leaning over a long way……..Get what?

As we cruised into Inverell, it was difficult to tell whether the grumbling I could hear was a malfunction of the bike or simply my empty stomach making its presence known. As the Guzzi didn’t seem to be in any difficulty it was deduced that it must be time for a sustenance stop. When we parked the bike and wandered off in search of a likely meal, I vaguely noticed – as is my want – that the Guzzi had a certain “extra” lean to it as it rested on its side stand. As no one else appeared to be worried by this phenomenon, I assumed that it was normal and so concentrated my mind on more important matters ie. lunch.

You see, my intuition wasn’t totally wrong after all. The side stand had given up the ghost and decided to relinquish all sense of responsibility towards the bike! Between the two of us, Windbreaker and I managed to avoid the embarrassment of the Guzzi lying prone in the garage driveway, and set it on the centre stand. It just goes to show how important it is to listen to those inner feelings of your Moto Psyche!!

Ed. As an incentive we used offer our sales reps a first prize – 1 week in Tingha, second prize – 2 weeks… etc.